The asthenosphere lies beneath the lithosphere. Scientists suspected this layer inside the Earth as early as 1926. It was not confirmed until the Great Chilean Earthquake on May 22, 1960 which had a magnitude of 9.5 and was the largest earthquake ever recorded by seismographs. 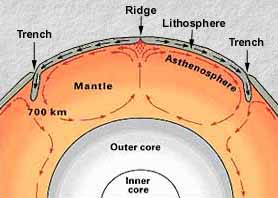 Upper boundary of the layer

The subduction zone earthquake off the coast of Chile was the most powerful every recorded by seismographs. The seismologists tracked the earthquake waves speed through the body of the planet. They confirmed the boundary between the lithosphere and this layer of our planet.

The waves slowed down at the boundary as the rigidity of the rocks decreased. P waves move relatively slowly at the top of this layer compared to the lithosphere but do slowly increase in speed as the depth and pressure increases making the rocks denser.

Flowing rocks in this layer

The weak rocks of this layer are much closer to the seafloor surface than they are under the continents. The rocks flow upward to within a few kilometers of the ocean floor where crustal plates are separating at mid-ocean ridges.

The asthenosphere lies below the lithosphere. Its upper surface usually is found at depths between 100 and 200 kilometers (62-124 miles). Scientists believe the bottom of the layer extends to approximately 700 kilometers (430 miles) at the boundary with the mesosphere.

Plate Movements  Do you know what are divergent plate boundaries, convergent boundaries and transform faults. Find out on this page.

Asthenosphere  Find out how scientists proved the existence of the this layer after the Great Chilean Earthquake in 1960.