Earths interior is divided into three main sections. The crust is the outer layer of the Earth and it is made of rigid rocks. The Earths mantle contains 84% of the planet's mass and lies beneath the crust. The Earths core lies in the center of our planet and contains 15% of its mass. 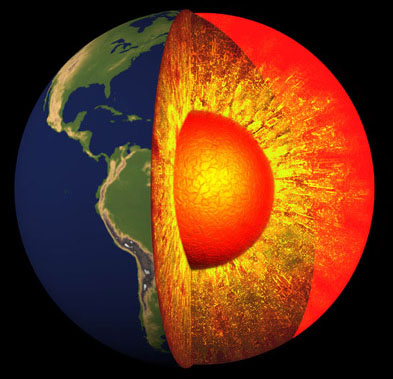 Scientists study the interior of Earth with earthquake waves. Compression earthquake waves (P waves) move through all layers of the Earth. A change in density will deflect the waves. An increase in density of the rocks causes the P waves to speed up. Primary waves, P waves, travel through solids, liquids and gases.

Secondary waves, S waves, travel through the Earth at a slower speed and are stopped when rocks melt. They travel only through solid rock. Beno Gutenberg used the fact that S waves stopped at the Earth's liquid core to determine the boundary between the mantle and the core. He discovered the mantle rocks were solid and the outer core is molten rock

Discovery of the inner core

Earthquake waves increase in speed as they travel through the mantle. The increased speed of the seismic waves proved that the mantle contains solid rocks.

S waves stopping at the boundary of the core proved the outer core was molten as the P waves continued their journey through the Earth but were deflected at the boundary.

Inge Lehmann using the speed of P waves through the Earth's core discovered the solid inner that has a radius of approximately 1220 km (760 miles).

Lying at the center of the Earth is a solid core of extremely hot metals. It is less dense than solid iron so scientists believe up to 10% of the core contains lighter elements. The scientists speculate it could be sulfur and oxygen that is easily dissolve into liquid iron at these pressures.

The pressure is so great that they do not flow like a liquid but vibrate like a solid. The outer core is extremely hot and the rocks melt at the boundary between the mantle and outer core. The outer core is believed to be primarily iron and nickel with a few trace elements. Earth's Magnetic Field is generated in this part of the Earth.

Today's research on the Earths interior

Scientists studying earths interior believe the inner core is 90% iron with the remaining 10% iron mixed with nickel, oxygen, sulfur or a combination of these elements.

The inner core is also suspended in the molten outer core and revolves slightly faster than the rest of the planet. Scientists also believe that the inner core could contain giant crystals that are lined up north to south.