Earths lithosphere is the outer layer of the Earth that we live on. It contains both the crust and the upper mantle. Beneath this layer is the asthenosphere that allows plate movement on our planet. 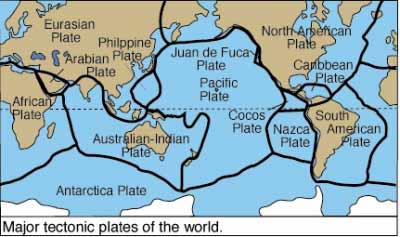 Earth's lithosphere is the outer shell of the planet. It contains the crust and the upper part of the mantle. The crust is made of primarily of granitic rocks. The upper mantle rocks peridotite, which contains more iron and magnesium minerals that granitic rocks.

Beneath the rocky outer shell of the Earth is the asthenosphere. The high temperature and pressure allows the rocks to flow slowly over long periods of time like a plastic. The rock's flow is measured in centimeters per year and allows tectonic plates to move around on the Earth's surface.

There are two types of crustal plates that make up the lithosphere. The continental plates contain the oldest rocks found on the planet. The oceanic crust is relatively young compared to the continental crust.

Two continental plates coming together form a collision boundary. Neither plate subducts, instead the rocks are smashed together. Great mountain ranges form above the Earth's surface and the underlying continental crust thickens as the plates are forced together.

Earths Core Find out how scientists use earthquake waves to study the Earth's core.

Asthenosphere Find out how scientists proved the existence of the asthenosphere after the Great Chilean Earthquake in 1960.

Earths Atmosphere Find out how the layers above Earth have formed and their importance to life on our planet.

Plate Movements Do you know what are divergent plate boundaries, convergent boundaries and transform faults. Find out on this page.

Lithosphere Earth's lithosphere is the outer shell of the planet. It contains both the crust and part of the upper mantle.

Planet Earth Find out about the different layers that make up planet earth from the core to outer space.