Ocean facts on this page include information about ocean trenches, black smokers, Mid Atlantic Ridge and tsunamis. In the links to other pages you will be able to learn much more about the oceans that cover approximately 70 of our planet. 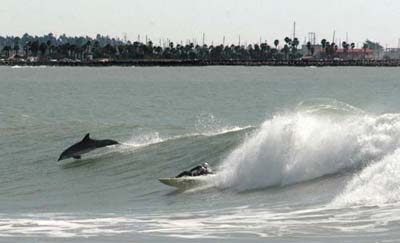 Wave surfer and dolphin near Surfer's Point in Ventura on February 28, 2010. Photo by Tim Hanson

Strong winds and earthquakes are the cause of ocean waves and tsunamis. Tsunamis have caused untold damage and killed thousands of people in recent years. They are caused when land slips along ocean trenches in subduction zones.  form when wind blows over the surface of the ocean.

Major new discoveries of what lies beneath the surface of the ocean have been made in the last 100 years. The Mid Atlantic Ridge runs down the center of the Atlantic Ocean. Ocean trenches that separate crustal plates in subduction zones have been found.

Plants and animals thrive in four oceanic zones. Black smokers that contain thriving communities of animal life was not discovered until the mid 1970s. The Challenger Deep is the deepest point in the ocean and has now been visited twice. One the first expedition the Bathyscaphe Trieste took to adventurers into the depths of the Deep.

Submarine volcanoes dot the ocean floors of the major oceans. The newest member of the Hawaiian Island chain is a sea mount off the coast of Kilauea, Hawaii. The picture on our home page is called The Aquarium and is located on the summit of a sea mount.