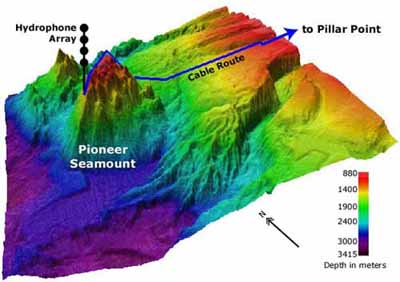 There are more than 60,000 seamounts worldwide. Only a few hundred of these volcanoes have been visited and about 1000 have been named. Many of these seamounts are hot spot volcanoes. They form chains of little known underwater volcanoes. The volcanoes grow as an ocean plate moves over a hot spot. Each seamount is active for a period time. Tectonic plate movement causes the volcano to move away from the hot spot and it becomes extinct.

The Axial Seamount, is an active volcano that is presently over a hot spot off the Oregon and Washington coast. Scientists studying the volcano find it teeming with life. Many of the life forms seem to have adapted to conditions on the seamount and live their entire lives around the volcano.