Current events in science takes you beneath the deep layers of ice that covers Antarctica’s continent as scientists study rocks and subglacial lakes looking for signs of life in the mud. 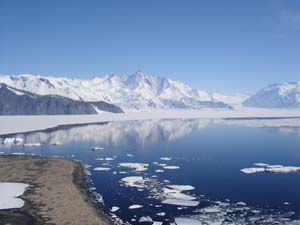 The continent of Antarctica is covered by an ice sheet. The maximum ice thickness is 4776 meters (15,670 feet). The average thickness of the ice is 1, 829 meters (6000 feet thick). Scientists studying Antarctica have discovered unknown mountain ranges and more than 200 lakes beneath the thick layer of ice that covers the continent.

The mountain ranges and lakes were discovered by airplanes flying over the continent using radar to study the land beneath the ice. The radar instruments bleeped out radio waves that traveled through the ice and bounced back when they reach the continent.

The radio waves travel at different speeds through solid ice, water and rocks. Using the speed of the radio waves bouncing off the continental rock, lakes and ice they were able to map the surface of the Antarctica continent that is not visible.

During January 2013 a team of scientists flew into a remote area above Lake Whillans, a lake about 1,000 kilometers from their base on the coast of Antarctica. They were flown in by a DC-3 that is widely used in Antarctica. Over 450,000 kilograms (1 million pounds) of drilling machines, fuel and scientific gear was brought to the area on steel sleds that took two weeks to traverse the ice from their base.

The engineers slowly drilled through the ice to reach Lake Whillans. They reached the Lake at 11 p.m. on January 27. A team of biologists work 20 hours to bring up bottles of lake water. The lake water contained fine mineral dust that gave it a honey color.

Current Events in Science - Talks about the Antarctica ice sheet and how they are gathering water from subglacial lakes, how mud samples.

Current Events in Earth Science - Find out about ancient petroglyphs found above Pyramid Lake, a playa, in Nevada that are thought to be the oldest in North America.

Kids Current Events - Learn how people living in rural communities in India are using Solar Energy Carts so they can work in the evenings.

Science Articles for Kids - Find out about the honey bees that travel around the United States pollinating farmer’s crops.

Science Trivia – This page includes fun stuff about the world we live in including Early Maps, Sailing Ships, Arctic Circle, and Amphibians.

Science Inventions - Bakelite was the first modern plastic. Its slogan was the material with 1000 uses. Collectors love jewelry made from Bakelite.

Science Current Events - Find links to the latest current events in Earth Science and science news on this webpage.