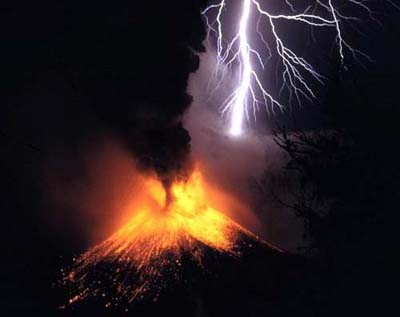 Super volcanoes can produce some of the deadliest events on our planet. Yellowstone caldera also known as Yellowstone supervolcano has erupted four times in the past at its present location. Yellowstone is a hot spot volcano that has formed on the North American Plate because its magma chamber sits over a hot spot that feeds the volcano.

Iceland sits on the Mid Atlantic Ridge that runs down the middle of the Atlantic Ocean. In the north on the east side is the Eurasian Plate and on the west side is the North American Plate. Iceland volcanoes are also hot spot volcanoes. The island located about a hot spot in the middle of the Atlantic Ocean. Lava caves sometimes form on the island when basalt flows out of rift valleys on the island.

The Vesuvius eruption that destroyed the towns of Pompeii and Herculaneum occurred in 79 AD. Pyroclastic flows covered the towns with volcanic material. Vesuvius is now a composite volcano. The mountain was a dome volcano that grew in the caldera of an ancient volcano in its early stages.