Super volcanoes is a term used to describe the largest and most destructive volcanic eruptions. These volcanoes produce at least 240 cubic miles of pyroclastic material during an eruption. These gigantic eruptions occur rarely and there has not been one in recorded history. 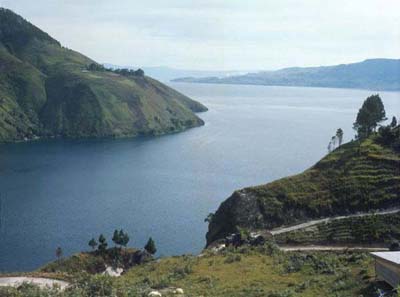 The most famous volcano in the United States is located in Yellowstone National Park. The site has three overlapping calderas formed during great eruptions. Each caldera eruption produced a slightly different type of welded tuff.

Lake Toba in Sumatra, Indonesia was the site of a supervolcano eruption that some scientists think almost wiped out the human race.

Pyroclastic flows swept out of the super volcano covering 20,000 square kilometers with thick deposits of welded tuff. Ash near the volcano's vent is 2000 feet thick. The ash layer covered the entire subcontinent of India to a depth of six inches.

Mammoth Lakes ski area in California was the site of supervolcano eruptions which formed Long Valley. Long Valley formed when the magma chamber beneath the volcano collapsed forming an elliptical depression in the ground 10 x 20 miles in size.

The caldera has been swelling in recent years causing the floor of the valley to dome upward. New magma moving into the magma chamber causes the swelling. When the magma moves to other parts of the chamber the caldera deflates and the valley floor subsides.