Planet Earth is part of the Solar System with the Sun as its center. Everything revolves around the Sun and is held together by the gravitational pull of the Sun. Mercury, Mars, Venus, and Earth are the four rocky planets in the Solar System. During the formation of the planet to the heavier elements sank toward the center of the Earth while the lighter elements formed the outer layers of the planet. 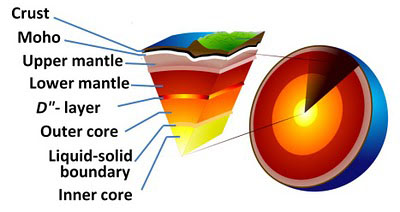 The Earths interior has been studied using earthquake waves. Lying at the center is the Earths core which has two layers. The inner core is solid containing extremely hot metals (iron and nickel). It lies at a depth of 3,160-3,954 miles deep.

The outer core is extremely hot and the rocks melt at the boundary between the mantle and outer core. The Earths inner core begins at a depth of 1,790-3,160 miles. Earth's magnetic field stretches from Earths inner core to where it meets the Solar Wind.

Earths crust contains the rigid rocks that are broken into crustal plates. The tectonic plate boundary of the crustal plates was determined by the patterns of earthquake waves that occur in the crust.

The lithosphere contains both the crust and parts of the upper mantle. The asthenosphere are weak rocks that allow plate movements on the surface of the Earth.

There are two types of crust. Continental crust contains the continents and the rocks are lighter than the oceanic crust. Oceanic crust contains dense rock from the upper mantle that are rich in iron minerals. Both crusts are in constant motion. Scientists use GPS to study movement of the different tectonic plates that cover the Earth.

The Earths atmosphere is an ocean of air that lies above the Earth's surface. It is divided into five major layers. The layers are divided by temperature and the atoms found in each layer. We live at the bottom of the atmosphere where there is sufficient air to support life on our planet and where weather occurs.

The Alaska Northern Lights are created by the solar wind from the Sun. When there is an increase in solar activity the solar wind interacting with the atmosphere produce the beautiful display of lights both in the Northern and Southern Hemispheres.

Plate Movements  Do you know what are divergent plate boundaries, convergent boundaries and transform faults. Find out on this page.