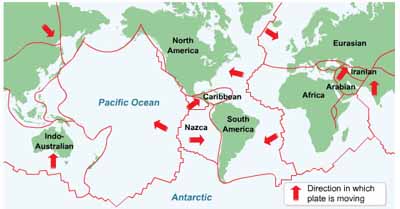 Molten rock flows out of fissures on the valley floor forming new oceanic crust. The mid-ocean ridges are part of the global mid-ocean ridge system that is found in all the world's oceans and is the largest mountain chain on earth.

The global mid ocean ridge is more than 80,000 km (49,700 miles) long. One section of the mountain range is a continuous system that is 65,000 km (40,400 miles) long and is longer than any other mountain range on the continents include the Andes Mountains in South America.

As oceanic crust is being formed at mid ocean ridges it is being recycled in subduction zones. The size of our planet is not increasing or decreasing in size by the growth and destruction of the oceanic crust.

The Mid Atlantic Ridge is part of the global mid ocean ridge system. It runs down the Atlantic Ocean from northeast of Greenland south to the southern section of the Atlantic Ocean off the coast of Africa. The ridge is spreading apart at a rate of 2.5 cm per year.

Columbus made four voyages to the Americas starting in 1492. Calculate how much further he would have had to travel today to reach the Americas by finding out the number of years since 1492 and the rate of seafloor spreading at 2.5 cm each year.