The Earths mantle lies between the crust and the liquid outer core. Eighty-four percent of the Earth's mass is contained in the mantle. The core is approximately the same width as the mantle, but it contains only 15% of its mass. The remaining 1% is the crust. 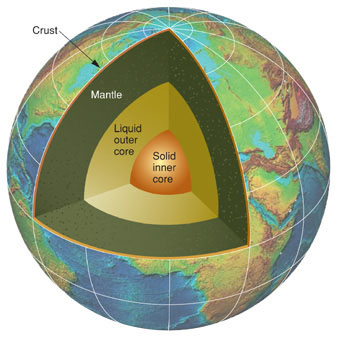 The boundary between the crust and the mantle was discovered by Andrija Mohorovicic, a Croatian seismologist. The Mohorovicic Discontinuity (Moho) was named in his honor. He discovered that earthquake waves increased their speed at the boundary.

The boundary depth varies. Beneath the continents it is much deeper than the ocean crust. It is the deepest underneath great mountain chains where the crust has thickened as two continents collided.

The Gutenberg discontinuity is the boundary between the liquid core and the mantle. Prior to Beno Gutenberg's discovery of the boundary at 2,900 km (1,800 miles).

Divisions within the mantle

Today scientists divide the mantle into at three or four parts. The upper mantle can flow like a liquid over long periods of time. This allows the crustal plates to move around the Earth's surface at centimeters per year.

The lower mantle lies between 660 kilometers and 2891 kilometers. The rocks below this depth begin to transition into the liquid core rocks. Rocks in the mantle can break apart at depths of up to 700 km.

Scientists still do not know how rocks at his depth break and produce earthquakes. A magnitude 8.3 earthquake happened at a depth of 636 kilometers on June 9, 1994. About 20% of earthquakes occur at depths between 300 km and 700 km.