Alaska Northern Lights are powered by the Sun. Magnetic storms occurring on the Sun send out a stream of electrons and protons that light up our skies at night. The electrons and protons are energy particles in the solar wind varies in temperature and speed as sunspots increase and decrease in the upper atmosphere of the Sun. 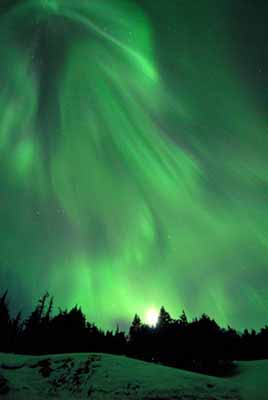 The sunspot cycle peaks every eleven years. During the peak of the cycle large magnetic storms occur on the Sun. The Sun ejects an increased number of electrons and protons from its upper atmosphere sending them streaming in all directions away from the Sun. The solar wind takes two days to travel from the Sun to the Earth where it creates the Northern Lights as the solar wind passes the Earth.

The best time to see the Alaska Northern Lights is late at night or early in the morning. You should also try to go to some place when lights from the city will not affect the sky. The best months to observe the auroras are September, October, February and March.

Check your calendar for dates when there will be a new moon during one of these months. Look for glowing and dancing curtains of light in the sky on these days. Common colors found lighting up the sky by the auroras are green, pink, yellow and orange. The most common color is green and red is the rarest.