People have wondered what causes tsunamis for thousands of years. Today we know they are caused by large earthquakes in subduction zones, landslides, volcanic eruptions and meteorites. 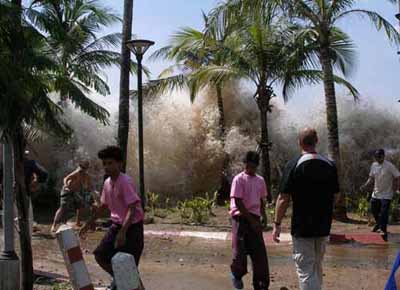 What causes tsunamis in the ocean

Today we know that tsunamis are generated naturally by earthquakes, volcanic eruptions, landslides and meteorites. Most tsunamis are form in subduction zones where an oceanic plate is being forced (subducted) beneath a continental plate.

The two plates become locked and pressure builds up in the rocks. The rocks store energy as the crumples creating small hills and valleys. When the rocks fracture from the pressure, the overriding plate moves over the subducting plate. The sudden breaking of the rocks creates earthquake waves radiating outward from where the rocks broke.

Tsunamis have two forms that move in opposite directions. The first form is a negative wave where the trough arrives first and the water begins to recede before the crest of the wave comes ashore. This is typically what people use as an indicator of a tsunami.

The second form of a tsunami is more dangerous because there is no warning about an approaching wave. Instead, the sea just starts rising upward like a very high tide.

The tsunami keeps moving toward shore gaining speed as it comes ashore. These two types of tsunami waves are generated simultaneously and move in opposite directions away from the epicenter of an underwater earthquake.

Large landslides can trigger local tsunamis that can be devastating. Lituya Bay, Alaska in 1958 was the site of a megatsunami. The landslide was triggered by an earthquake that caused rock and ice to fall into the  bay. Thirty million cubic meters of rocks and ice slide into the bay.

The bay is a narrow inlet with the rocks and ice generating a megatsunami in the bay. The waves washed up the sides of the bay 1,720 feet (470 meters) high.