The Richter magnitude scale was developed in 1935 by Charles Richter with the help of Beno Gutenberg. The size of the largest wave recorded by a seismograph at a reporting stations determines the magnitude of an earthquake. 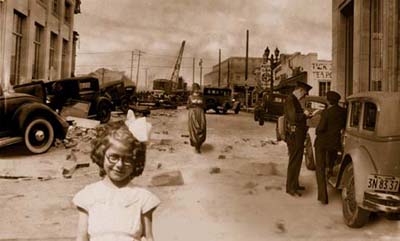 Long Beach, California after an earthquake in 1933.USGS

The scale uses the ground motion (amplitude) of earthquake waves recorded by a seismograph at recording stations to determine an earthquake's magnitude.

Energy of the earthquake